The University of San Diego Center for Peace and Commerce has recently awarded us the 2012 Southern California Entrepreneur for Social Change award! We were selected out of ten organizations including AidChild, Nika Water, Just Like My Child, and Pure Avida Bracelets. This is a tremendous honor to be mentioned alongside these great organizations, and it is also a testament to how much we have accomplished together! 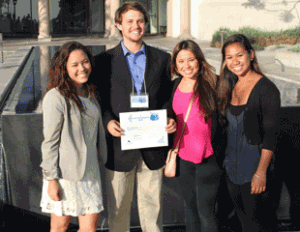 University of San Diego students created a video featuring one of our Executive Chairs, Robert Schultz, and this video competed against the other organizations on Facebook for “Likes” (in which we received well over 400 total! woo hoo!). Then, the three videos that received the most votes were shown in a class at USD’s School of Business (Global Entrepreneurship for Social Change) where they were discussed and voted on again until we emerged as the winner! Thank you to everyone who “Liked” the video and helped us win this award, the support we received was remarkable. If you did not get a chance to see the video, you can view it here:

This entry was posted in General. Bookmark the permalink.